If you’re interested in adopting, and adopting a more dedicated child, you have to ask yourself how much you’ll be able to do with them. Even in SL, kids get restless! My kids, bless their hearts, have been pretty understanding about my computer issues but I know there have been nights where they were totally bored just standing around with me, even if they said they weren’t.

Luckily, that’s not a problem now! Abby and I went shopping at a few stores earlier and she said that now I’m not acting like a tired out mom who doesn’t want to do anything. *laughs* Nope! I did have to relog once after doing her pics since I had been really working the computer, but honestly, I was only a little bit laggy. I think it was more out of habit than anything else.

Tonight, the Zanzibar clan headed out to The Corn Field! If you’re a long time reader of my blog, you’ll remember that in 2008 when I first heard about The Corn Field [which I said was new, but I was wrong], I so badly wanted to go! Then in 2009, they opened the place up so people could come take pics and stuff like that. Well, it’s back! But it’s totally different this time! It’s a GAME.

First you start out at a portal place [much like in the Linden Realms game] and walk on through. After you say yes that they can put attachments on you [say yes!], you’re outfitted with a HUD, a basket, and a good plank of whackin’ wood. Why whackin’ wood? Because there are MONSTERS!! It’s supposed to be the souls of griefers past! *laughs* And there’s some thing that Aldwyn called Mr. Potato Head that’s got a candle on top of its head. But you don’t have time to stare because your mission is… to collect corn!

Yes. See. Along with whackin’ monsters, you have to collect corn in your basket! The more corn you collect, the better it is because you turn them in for Cornbucks, and Cornbucks can be turned in for better armor and weapons, or just some prizes. You’d think it would be easy, but it’s not really! If you get hit by a monster a couple of times, you’re sent to a graveyard and you lose all your corn! Not your coins, but your corn! I was trying to run to the barn to turn in my corn after I maxed out at 20 pieces of corn and right before I got there, a monster beat me and I lost all my corn! Plus, being that you’re in a corn field, it’s awfully easy to get lost. But it was so much fun!! And I didn’t crash once!

The girls definitely had a great time and are eager to go back. I want to go back to get more corn!

Oh, and it’s kinda cool for pics out there, too. You know, if you’re into that kind of thing. I just wouldn’t advise standing around for long, though, unless you like being eaten by monsters. 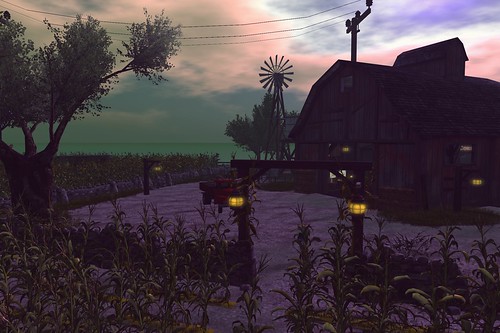 You can see more about The Corn Field here: