Weekends are usually pretty busy for the both of us. I’ve probably mentioned it before, but one of Aldwyn’s jobs is that he’s a DJ. [RL, not SL.] So his weekends are often taken up with various events that he DJs. And often, my weekend days are taken up with visiting with my parents or doing other RL stuff. But nights…it sucks sometimes when he’s not able to be around on the weekends. I actually didn’t expect him to be around tonight [neither did he], but he managed to make it in. Too late to see the girls, because they needed to sleep, but at least I got to be with him. 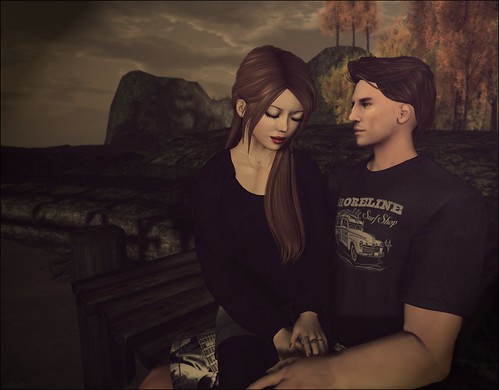 So, can I confess something? Sometimes I have teeny tiny tantrums internally when he tells me he won’t be around. I know, it’s awful! Don’t get me wrong, I adore that our girls are normally around to be with me, and if I were ever really lonely, I have the rest of our family to lean on. But it’s not the same as having my partner around when I want to do things. Not that we ever really go out any more…but you get my point! :-p But, RL comes first, for the both of us, and we know that.

The one saving grace is that I know he misses me when he can’t be around.

If I didn’t feel that, I totally would have jumped on that newbie that blazed through our house earlier tonight when the girls and I were in the living room. *laughs* Hey, Birdy liked his accent. It could have worked!