After almost 5 long days away, my honey came home to me tonight. 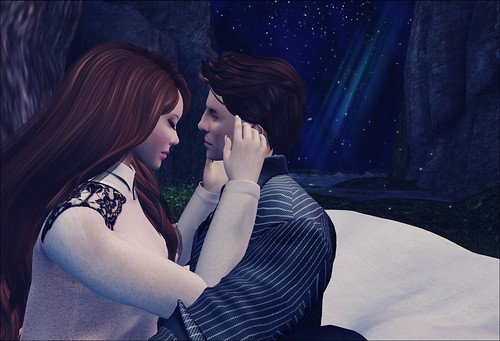 When we were on vacation, we spent a night in a special secret place hidden near the caves. We both enjoyed ourselves so much, when we got home we thought it would be a great idea to make a little adult place on our parcel where we could spend some time together without having to actually go anywhere when the girls are in bed. While he was away, I decided to set up an area to surprise him with when he got back.. It’s not really perfect and if you look at it from the outside, it’s a big ol’ mess. But when we’re inside, it’s actually really pretty. It’s not quite finished yet, but pretty much is. Does anyone make little candles for water that float around? Well, not Linden water, but like…prim water. I have some little candles right now but they don’t move around and I’d like them to move around.

I’m actually looking for some very specific sparkles, too, but I have nooo idea who makes them or if they’re even still in SL. They’re like…kind of gold? And particles, but not fluffy particles. If I can ever find an old picture of somewhere that had them, I’ll show it and maybe someone can help me out.