Once in a while, Aldwyn and I attempt to not be lame and we go in search of something that the family will be able to do together. Pretty much every outing that we have done with the family in the past year, my sister has organized. She is just a LOT better at that stuff than I am! And thank goodness, too, or we’d probably never do anything. *laughs*

We stumbled upon this area called Woodsy. It’s not really a big activity sim, but oh, is it ever pretty!! It’s open to the public, and I don’t think that anyone actually lives there, but there is a little house on the sim, so maybe someone does. There are some areas for couples dancing, too. We danced for a while until he got sleepy, and then I played around with my windlight to get this shot. This is just SL windlight and shadows, none of my normal Photoshop filters or anything. 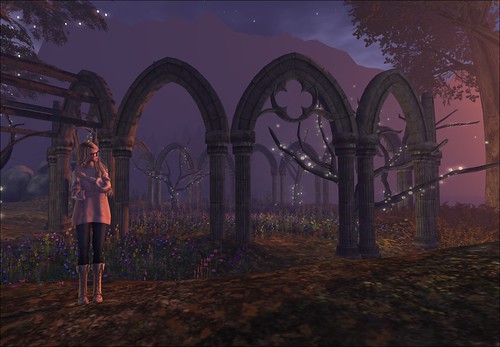 I *think* you are able to rez out there, so if you want to drop a posestand or something, you’d be able to. There was a little sign that said that snow was coming soon to Woodsy, so I can’t WAIT to go back to take more pictures!!

As Aldwyn and I were dancing, I mentioned to him that I like it when people are good at stuff. I mean, this sim is just so pretty and put together so nicely. It’s like everything I’ve always wanted for our parcel but I’ve never been able to really get it together. So someone who is good at putting together things like this…I really like it. And I could sit around crying about how I suck at landscaping and all of that, but really, my sucking at it just means that I appreciate it a WHOLE lot more when I go somewhere and someone has done it so well. If everyone was good at everything, who would ever appreciate it?