Goodness, what a past week I’ve had. People have always asked me why SL drama never seems to bother me and why I can just move away from people. My RL? Has nothing on SL drama. *laughs* Not always, but when it does…yikes. It was nice to have some time in SL tonight after the family went to bed to just be quiet for a bit. 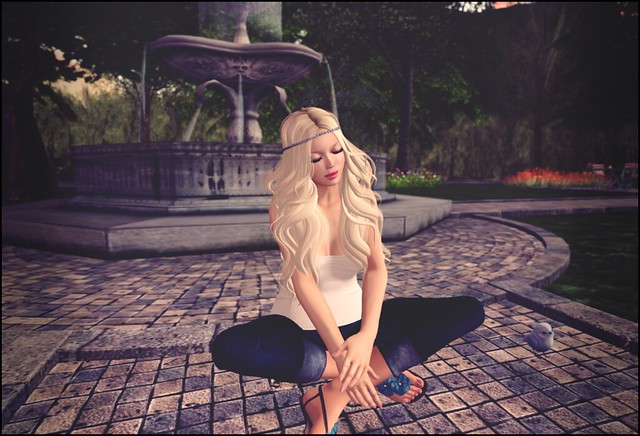 Don’t get me wrong, my RL isn’t horrible on a normal basis. But when things are bad, I spend a great deal of time trying to “fix” everything. Be strong for everyone, calm everyone down. To me, it doesn’t matter how I feel inside. My feelings don’t matter in that moment because I need to make sure everyone else is okay. It doesn’t matter that I was only sleeping 2-3 broken hours a night or eating maybe once a day. It doesn’t matter. I try not to lean on anyone too much because 1, I don’t like to bother people, and 2, it’s simply not something I do. I probably should sometime. It almost seems too sweet to think about – being able to lay down my problems on someone and have them tell me that it’s going to be okay because they’ll help me take care of it. I guess that doesn’t happen very often as you get older. I felt a lot this past week like I was on an exercise bicycle. I was cycling and cycling and while I might be doing okay in one area, I wasn’t really getting very far at all. I know how emo that sounds. *laughs*

But I had such wonderful IMs and private plurks from some people. Mostly people who I really didn’t think read my plurks too often. It was nice, you know? To just know that they were thinking of me even if it was just in that moment that it took to write me. I am a full believer in the power of prayer, and I know that the prayers and the good thoughts helped.

Hopefully things will quiet down now. I miss being in SL and I don’t like that when I have been there this past week, I have been too frazzled to really enjoy it. I am behind in blogging and I’ve been wanting to do another video. I have actual YouTube subscribers now. How crazy is that? I don’t know what to do a tutorial about, though. I’ve been thinking maybe I’ll do just a “daily vlog” type video like some of my favorite vloggers do. I’m not sure I’d be that interesting though. Like, oh hi, please watch me put on an outfit and take a pic. Zzz. LOL! We’ll see, though. We’ll see how it all goes.