So we switched houses again.

If you’ve known me for a long time, you know that in the before kids days, I used to switch houses frequently. Aldwyn used to complain that he never knew where exactly he’d be logging in at most days. When you don’t have kids and you have an abundance of new houses and a partner who never decorates, it’s no problem at all to switch houses. PLUS, back in the pre-mesh days, we didn’t have so much stuff. Have you all noticed that? If you had 500 prims to work with, you had a small house that probably took up half your prim allowance, if not more, and a few trees, a bed, a couch, and maybe decorations and that was that. Now you can literally have 500 things on your 500 prim parcel, and houses are sometimes not even 100 prims. That’s a lotttt of picking up to switch houses. *laughs*

But after we got kids, I didn’t like making them pick up their rooms too often. And houses started to feel a lot more like homes and not just places where we stood around in. So when Birdy joined our family, we moved into a very big house and stayed there until last August when we moved into a new house. Then we moved back into the big one. And now… well, I needed a change. So we moved into a house that I absolutely loved a few years ago but that we hadn’t stayed in long.

It’s been really fun decorating! This house is a lot smaller than our last one. Rooms are smaller and it didn’t have a feel to it already. In our huge house, I felt like everything had to be very neutral and clean. In this one, I’ve been letting my boho girl flag fly free. I had to ask Aldwyn if I was going a little overly boho because basically nothing matches. *laughs* But it’s making it feel very homey and more like me, so I’m happy with it so far. 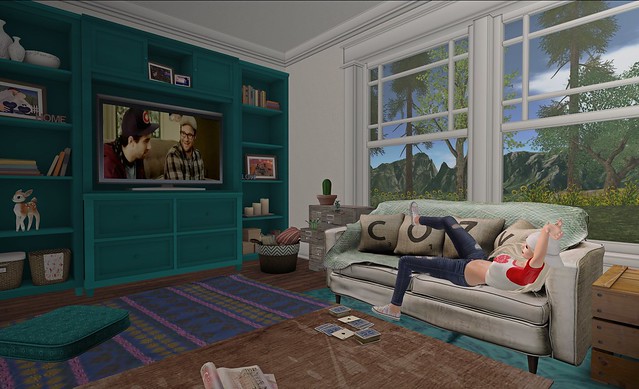 See, what had happened was… I put this tv out. And I wanted to see if I could use the tv. But I could not. So I pulled out another tv to match it to this tv. And then I went up to our movie theater to turn on a movie to see what would happen. And well. Then I just laid down and watched a movie.

That’s what happened and why I still have other rooms to decorate.