When I started this project for the second time, I was coming off of a year that was probably one of the most stressful of my life, but one that also had a few high moments. We had just had our 3 month SL wedding anniversary and we were very much in our own tiny world. Heck, even just looking back at those first pictures of 2012, we even LOOKED younger. I was not even wearing that much mesh! :-O

But as the year progressed and went into 2013, I realized that I was lonely. Not when Aldwyn was with me, of course. But when he wasn’t with me, I was often alone. I knew I needed something more, I just didn’t know what. I was scared to let anyone into our bubble. I didn’t want to enter anyone else’s bubble. Then one summer day last August, I took a landmark and answered a question that started a whole new world for me. 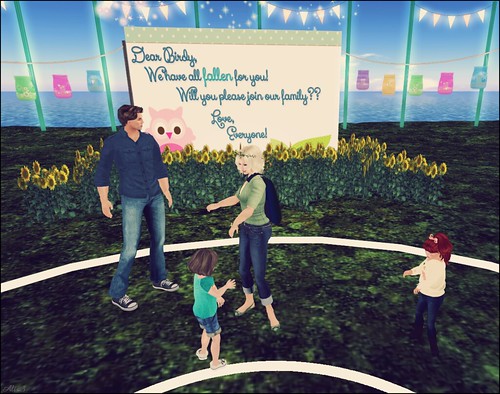 After Lolita dumped us from the sky after scouts, I got this idea in my head that for her surprise adoption, we should go skydiving, as falling from the sky and laughing was kind of Brianna’s introduction to the craziness that is our family. I found the right target and the right parachutes. I put together a pretty note, lights, sunflowers, and sparkles. She and I jumped time after time last night so I could make sure that she would get right in the vicinity of the target. In my head, it would be perfect.

But nothing is perfect in life, and I think that’s what makes it so beautiful! I sent the family up in the skydiving pod and jumped out immediately, running to the target to put the sign and everything up. Then I heard SPLAT! SPLAT! SPLAT! Abby, Lolita and Raven fell to the ground without their parachutes opening. Brianna went sailing off into the water way on the other side of the target. I was DYING and laughing and yelling “Okay! Everyone run towards the target!!”

I was laughing and nervous all at the same time. I was shaking. Brianna said she cried. Aldwyn would not rez for me even after 2 relogs and a cache cleaning. Once he finally did, I just laughed and snapped a picture. This wasn’t the perfect adoption I planned, but it was perfect for our family.

Thank you if you’ve been reading for a while. There is definitely more to come!

The wedding was all I could have hoped for – and more!! I will have more pictures later, and a lot more to say, but we’re about to start a new adventure together, and so I’ve got to go! Thank you to those who shared in our day, whether you were there with us physically, or sending good thoughts our way. We love you all and this day was made more beautiful by having you in it!