Oh my goodness, what a week! RL has been kickin’ my butt! But things have hopefully calmed down [and I got a new router] which is a good thing because tonight was the last scouts meeting until the fall! The scouts are taking a summer break because of vacations, summer camp, and stuff like that. We did a make up badge night since throughout the scouts season, we’ve gained a bunch of new Bumblebees. So tonight we did space night again and we had a story [told by Lolita, and expertly acted out by Takeo and me!], went stargazing, and went back into space! 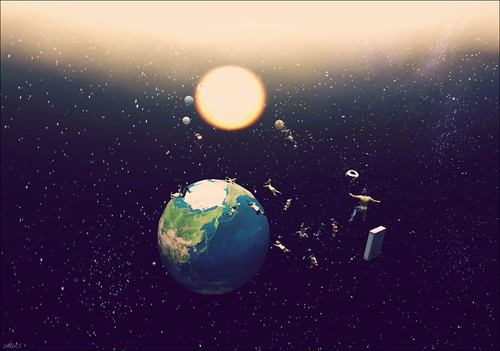 It was super fun, as usual! I am definitely going to miss our weekly meetings with our little Bumblebees this summer! I think all of us still want to try to get together throughout the summer, for camp outs and fishing and to just hang out. This was my first big “kid community” type of thing and I just had a blast getting to hang out with all of the kids every week. If you’re a kid, I absolutely recommend getting into scouts next season! If you’re interested in what goes on in both our troop and the other troops, you can check out the Sim Scouts Flickr Group to see all the fun!

After the meeting, the family hung out for a little bit since we have not all been together since before Lolita’s and Riley’s birthday party last weekend. It always so fun when we get to chat together and I get to say things like “Abby, I told you that you can’t sell your sister” and “Hey! Calm your butt!” LOL!!

But after we said goodnight to the family, and after the girls went to bed, Aldwyn and I finally got a little bit of time together. It’s been almost a week since we’ve been able to catch up with each other because his schedule has been crazier than mine! Luckily, summer vacation is coming up and we should get to see each other more often. Can you believe we’ve been together for 4 years next month?? 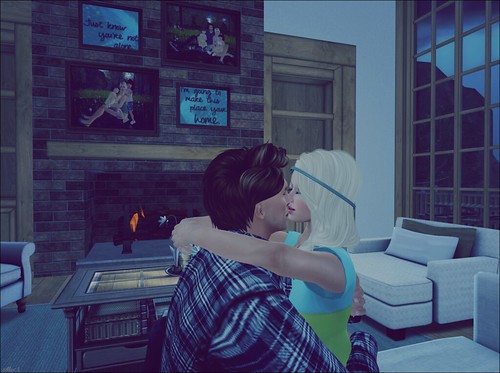 And he’s not even sick of me yet! LOL! It’s funny how the “flavor of the month” becomes someone’s favorite flavor. *snickers*

Although if he does ever try to leave me, I’m totes asking for child support. 18 years, 18 years, I got two of your kids, got you for 18 years!!

Tonight was scouts night! Our little Bumblebees got to hear the story of Robin Hood, and then did archery! I really adore our scout meetings. We always do something fun, and just being around the kids is a real delight. Most of the kids that are in scouts with us are dedicated kids, so their little emotes and gestures are just too too adorable for words! I wasn’t able to get any pictures tonight because I was lagging like crazy, but Brianna did, so I’m stealing one of her pics. 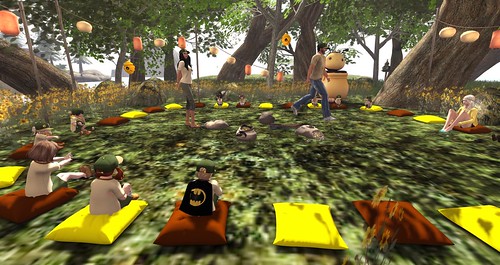 Things are really starting to come together with our trial with her. I feel like once we completed the “official” Heritage trial, we all got a lot more relaxed. I know I did, anyway. Not just because a week is not REALLY enough of a trial time, but also the constant messages saying a child [or a parent] has registered and is at the facility RIGHT NOW were very grating. I don’t know how many kids are in SL, but in just a few hours overnight, I’d get on average 10 offlines like that. Then there is the whole “You have X days left in your trial!” messages. I understand why they do it, but it can be a little nervewracking.

But now that we’ve decided to extend our trial on our own, things are definitely calmer. We can get to know each other at our own pace. Tonight was just fun because we got to be with the scouts, then with the family. Of course, we did have one hysterical moment that had everyone laughing until we were gasping when Lolita was trying to pick up some of the things in the archery area and accidentally picked up the dome we were in. Everyone just went falling down to the ground from 3500m up! We were all laughing so dang hard, no one even hit Fly. We just kept falling! Even now just writing about it, I’m cracking up! The kids were doing their “Ahhh!” gestures and my sis and I were laughing like crazy and Takeo said, “Well…is scouts over?” It was awesome!

After our crash landing, the Oleanders came over to see our new house. Riley was a sweetheart and dropped off a kitchen for me, so after we chatted with them for a while, and after people fell out of the window a few times [I dunno], I set about to making it work in our kitchen area. Abby had to go to bed so Bri, Aldwyn, and I stayed on skype for the rest of the night while I moved stuff around. We haven’t been just the three of us on skype, so it was nice to get that time together. 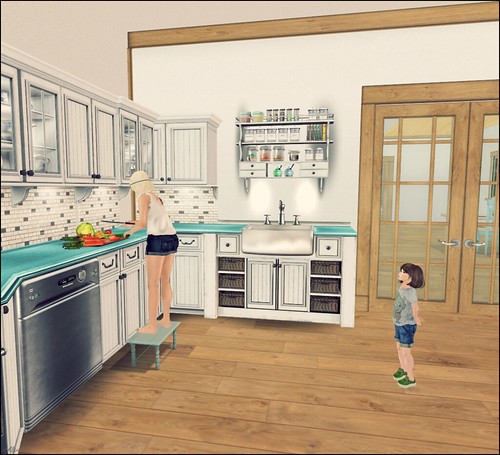 I don’t think the kitchen is actually that BIG, but when you’re shorter like me, sometimes you need a stepstool!! It probably fits Aldwyn just fine. Maybe I should make him do the cooking from now on?

And I just noticed that after this post, I only have 4 more to finally complete my 365 day project. It’s only taken me over 2 years. *laughs*

Awesome day! This post is kinda picture heavy today, but I’m sure you all don’t mind. 🙂

As always, Thursdays are BUMBLEBEE night! We start off every meeting with some exercise! 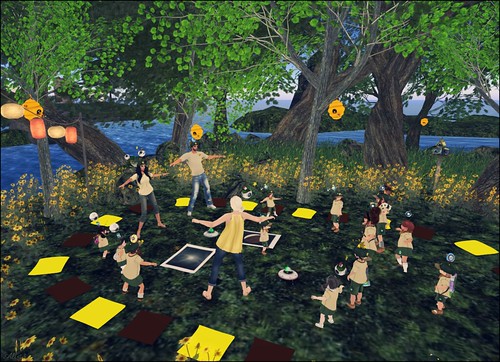 Tonight was Space Night! Takeo taught us all of the planets [even the dirty sounding one] and Lolita told a space story about aliens! Takeo and I helped during the story by doing some moves. I think we’re just this much closer to Broadway, really. After the story, we gathered up our little Bumblebees and headed off into space! 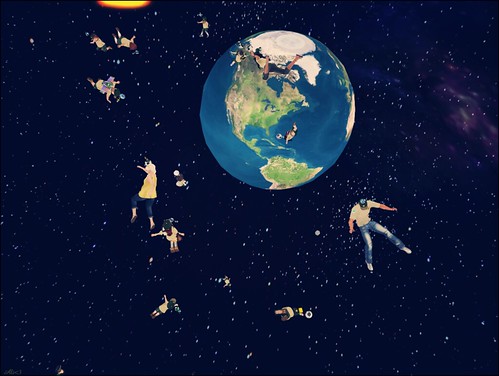 I don’t know how other troops do it, but we always have a snack at the end of the meeting. Since I’m the den mommy, I always get to come up with the snack. And tonight’s snack was milkshakes! 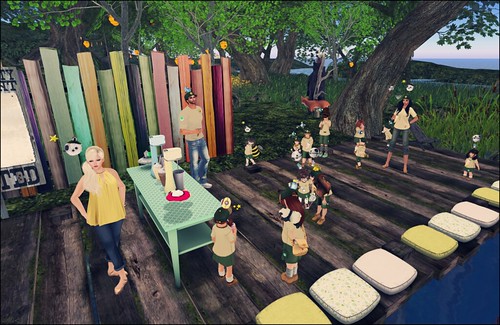 Even though it was Bumblebee night, it was also PACKING NIGHT! I started packing before the meeting tonight. I SWEAR, everything is absolutely necessary. I mean, we’re going to be gone from tomorrow night until next Thursday! 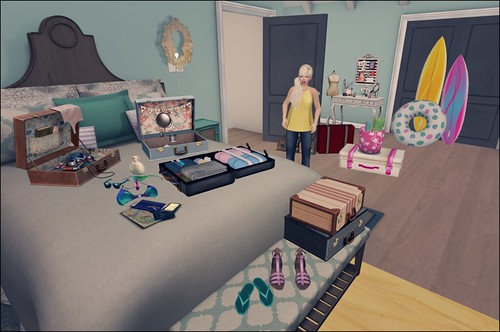 After the meeting, I went to see how Abby was doing with her packing. All of this is also necessary. Including the 25 pairs of underpants she’s bringing. *snickers* 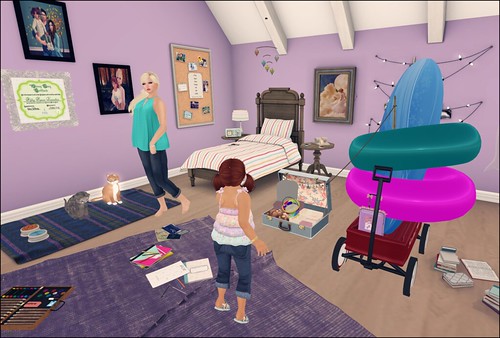 Before it was time for her to go to bed, she wanted to take a few things down. I just didn’t realize HOW she planned on getting things down the stairs. 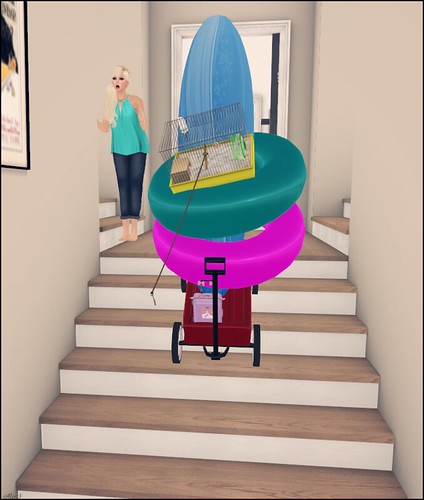 Aldwyn says she is totally my child.

But little girls need their rest, so we put her to bed so she can be bright-eyed and bushy tailed tomorrow. I ran down to the car to put a few things down. I think we might be in need of a bigger car soon. 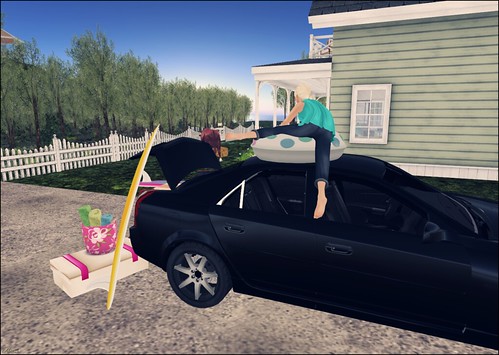 By the time Aldwyn brought a couple of suitcases down, I had gotten my innertube strapped to the top of the car. I think he didn’t quite understand the whole packing business. But REALLY…really… All of this is necessary! 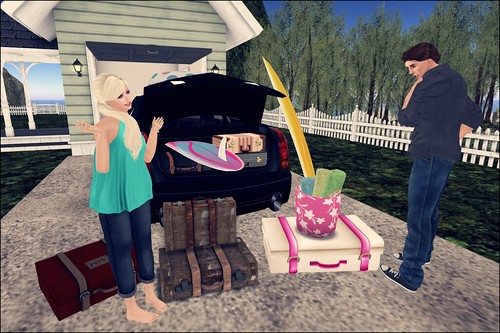 Tomorrow is going to be so so fun!

Tonight was the first meeting of the Bumblebee troop! Our little bees buzzed around the beehive, and then took to the skies and became…Bubblebees!

Sorry for the poor quality of the photo. My graphics were cranked way down so I wouldn’t crash too much since we had about 25 people on the parcel. But aren’t they cute??

Have I even mentioned the whole scout thing in here? I feel like I probably only plurked it. Sim Scouts is a fun thing for the kids in SL to do. It’s like Girl Scouts/Boy Scouts/Camp Fire. There are 6 troops with an average of 20 kids in each group and each troop meets for an hour on their meeting day. Lolita and Takeo are the troop leaders for the Bumblebees, and I’m the den mommy! They come up with all the stuff to do, and my job is to pass out band-aids and give hugs and also bring snacks. Tonight we had cupcakes and lemonade!

I think the kids really enjoyed the hour. I know I had a lot of fun listening to them laughing and coming up with answers to the “Getting To Know You” questions.

But… The troops and the leaders need new uniforms! Their shirts just don’t fit very well at all for any of them, and the sashes are hard to edit. Makes me wish I knew how to do mesh. I’d whip them up something new in a heartbeat. But I guess for one day a week, it’s okay. And being a den mommy, I don’t have to wear the uniform shirt anyway, soooo… there’s that. 🙂