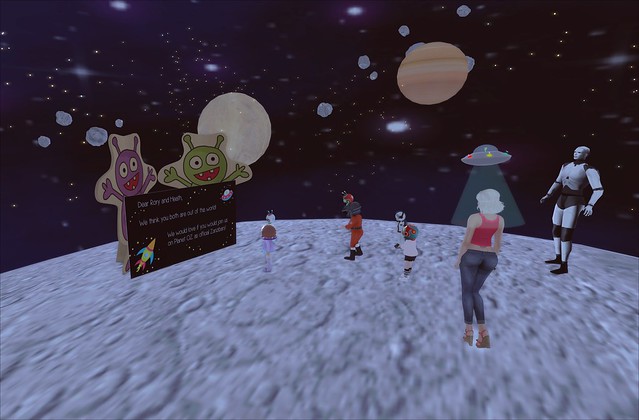 Tonight we asked Rory and Heath if they would be official Zanzibars, and they agreed!! We didn’t scare them or bore them away! *laughs*

We asked them in a surprise way, since that’s how we roll around here. Aldwyn had suggested to me last week that we ask them by flying a spaceship up into space. I have a space ball we have used before and planets that explode [which everyone loves to do!] and so we decided that it would be fun to ask them that way. I decided the aliens could greet us “in space” with the sign. Of course, the ride to space was… well, it’s US. What can I say? We’re just US.

But we eventually made it to space, and the aliens were holding the sign, and there was a flurry of “YES!” and “YAY!” and screams and everyone was just incredibly happy. 🙂 Then the time came for them to accept their new names.

We really could not be happier! When Aldwyn and I had talked about possibly adopting again, probably late last summer, we had planned on just one kid or perhaps just being godparents again. But these two just slid into our lives so perfectly and are exactly the kids we needed to complete our family. This is it – our last adoptions.

I think we did brilliantly. ❤

Remember in my last post, I said we had plans and I’d talk about them later? Later is now! 🙂 Guess what we did? 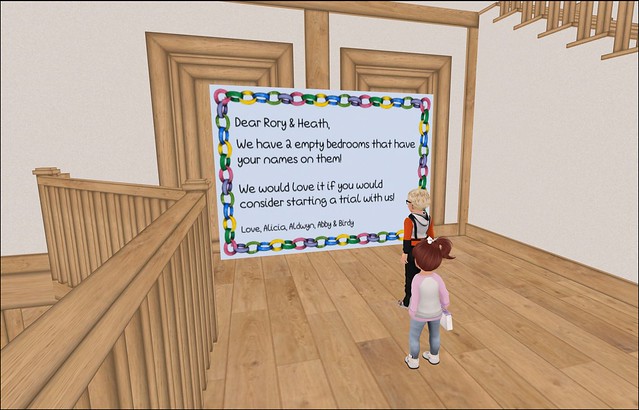 That’s right! Our family is growing! Well, in the way that SL families grow – by trial and hope and luck!

Over the past few months, I’ve gotten to know our friends, Rory and Heath, better through camp, and plurk, and they have showed up at some of our family events. They are exceptionally darling kids! When they mentioned back in November that they were putting up a panel at Heritage…well, thoughts started forming in my mind. *laughs* But after the “little blonde girl that wasn’t” debacle back in October, I was hesitant to even bring up my thoughts with the family. But believe me. I had thoughts!!

A bit before Christmas or so, my thoughts suddenly became pretty much everyone’s thoughts. We had the room for more kids. We definitely have love in our hearts for more kids. Our girls let us know that they would like to have more siblings. Especially these two kids, given that they were already becoming big parts of our lives. But our holiday schedules were all over the place and I did not feel comfortable bringing someone in for an adoption trial if we were not going to be around very much. So we waited.

So cut to last week. Aldwyn and I sat down and had a talk with each other on if this is something we both really wanted. And we talked to the girls because, ultimately, this affects them more and we would never want to expand the family if they were not completely on board. But of course they were! They have been so excited about this! They have been asking me almost daily WHEN we were going to do this!

But, things had to be ready. We needed a bigger house. I know, it would be easy to have the kids share rooms. I simply like for each kid to have their own spot. We really don’t spend a ton of time in the bedrooms or anything, but I think it’s best if they have their own little spot that is JUST theirs. And, again, I really did want to go back to using our old house! So we packed up, put out the old house, had Lolita fix our landscaping [we just went spring on Bluebonnet!!!], I made a sign for Rory and Heath, and we were ready to go!

Of course, being us, it didn’t go as planned. We actually planned to do it Friday night but well. *laughs* It’s okay, though. It actually worked better doing it Saturday night! I think we were all nervous. I know I sure was. I mean…they could have said no. I was literally shaking! AND THEN THEY SAID YES!! We have demo kids! LOL! Abby and Birdy have never had a brother before, so they are pretty excited about that. Poor Heath. So many girls. *laughs* But now we have FOUR guys in the OZ family. Oh my heavens. 🙂

Aldwyn and I spent some time with all of them and then said goodnight to our kids and went for a short date with each other. It was good for us because we have not had this chance in a while, and also I am eager for the kids to start developing more of a sibling bond with each other outside of when we are with them.

How long will the trial last? Couldn’t tell you. As everyone knows, we believe in long trials so we can get to know each other well and make sure that everyone is on the same page, family-wise. It’s better that way! But…we have known Rory and Heath for a while, and I think they have a pretty good idea what our family is like, so who knows. I’m not rushing anything. We’re not going anywhere. ♥