So I have insomnia pretty bad most days. Like, it’s 3am right now and I’m not at all tired. I really wish I would just go to bed when everyone else does, but I’d just end up tossing and turning and doing nothing. Some nights, Aldwyn tries to get me to be sleepy, but it doesn’t always work. 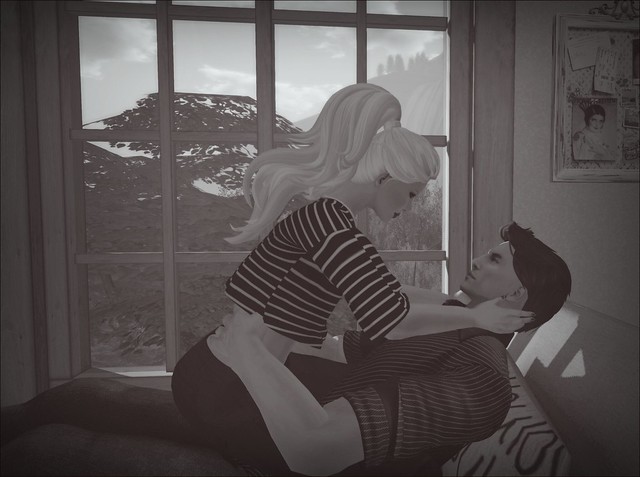 He tries, but the insomnia is pretty strong. So he went to bed and I went outside to take a couple of blog pics and then came back in to watch tv and work on pics and braid my hair and drink some water and paint my nails.

You know what’s also strong? My brattiness. As we were staying goodnight, he told me, “I love you, don’t stay up too late.” My response?

I’m awake far too late tonight. Far. Too. Late. But I think it’ll be the last night I’ll let myself do this. Tomorrow, hell or high water, I’m in bed before 2am. My time, I should say. Not SL time. 🙂

I spent a couple of hours in SL tonight, hitting up a few of the stores for Project Themeory and Spruce Up Your Space. I really like the sales that last for at least 2 days. One day sales make me anxious, like I’m going to miss something amazing if I don’t manage to get into SL until late that day. But weekend 2 days sales are great and I picked up this fab chair from LISP Bazaar tonight. It’s part of a knitting/sewing set. Really awesome, and it fits on the balcony of my house really well.

So while I was just hanging out on my balcony, I was watching a group chat that popped up. There are quite a few creators in the group, but it is a public group that anyone can join. There’s an event happening soon in SL and one of the creators in the group started to whine about having not been invited into this event. The way she made it sound, it was as if she needed an engraved invitation. She even went as far as to say that she’d start a fair on her own sim for her own products. Oh hey, I’m pretty sure that’s called YOUR STORE. But then she added in that others that had been “shunned” from this event could come, too.

If I liked the products that this person makes, which I don’t, I would most definitely think twice before purchasing from her.

I think that creators in SL really need to watch what they say in public forums. Not that I’m saying they should completely censor themselves or not have fun or whatever, but think of the whole Kenneth Cole twitter debacle. PR is a big deal if you’re attempting to get people to come buy stuff, you know? Not to mention it’s just flat out tacky to complain about not being invited to events, or say that you’re not making any sales, which I have also seen people do. It just makes people uncomfortable and feel like they have to go shop or have to invite you to events, even if they don’t think your stuff is very good.

I really should be in bed right now. Or working on a blogpost for an SL company & service. Or finishing up an interview notecard. Or I could be finishing up the haunted castle since Halloween is pretty soon. Or I could be blogging some items that I’m backed up on. But…mostly I’ve been admiring my pretty nail polish and reading up on magnesium deficiency. My RL bestie’s hubby was chatting with my RLBF about my health [God, don’t get me started.] and mentioned that I may be deficient in magnesium based on some of the things that are going on with me. To his credit, he knows a lot about these things, so even though I pretended like I wasn’t listening, I was. I’ve been taking a supplement the past few days and I gotta say…I’m feeling a little better. Who knew?

I’ve been thinking that I’m going to give myself my own blog challenge next month. It’s November, which for the past 10 years has been a pretty dreadful month for me. If I’ve never mentioned it before in here, and I probably haven’t, I lost my oldest sister in November 1999 very very unexpectedly. I went from this kind of confident, cool chick to this overly anxious, crazy thing. I pretty much had a nervous breakdown a couple of years ago and picking myself up off the floor [both figuratively and literally] was pretty hard. In a way, being Alicia for the past couple of years helped me remember who the typist behind her really is. She has faults, same as her typist. She’s shy with most people, she almost never asks for help when she needs it, she takes on everyone’s problems as her own. Her typist is pretty much the same way. But the both of us work well together, and between the both of us, we’ve learned how to take happiness when it comes. And that’s why I think for the month of November, I’m going to blog at least once a day, and each post will say something that I’m thankful for, no matter how small. And no, it’s not just going to be 30 days of “OMG I love everything!” How boring would that be? :-p It’ll just be 30 days of blogging, with the extra bit of thankful. 🙂

Ok, yes, I’m writing SO much tonight. LOL! So let’s break it up with some pictures! Woo! Pictures!

My friend Heidi gave me a dandelion. I loveeee dandelions!

Everyone was chattering about how fantastic the new Tres Blah skins are. I like the clothing from that store, and my beach cottages actually came from there [I bought them ages ago, I’m really not sure if they’re still for sale], so I was excited to go look at the skins.

Then I wasn’t so excited anymore.

Sophia and I went out to a store to look at a hair called “Titty” earlier tonight, because sometimes we are 13 years old and going to look at “titty hair” made us laugh really hard. There were some crazy hairs in there, and then we found poses.

This caused Sophia to sing “FAME!” And then we laughed like idiots until we cried.

After our hair outing, I was standing around in my house when she told me to tp her. Next time I need to ask her what she’s wearing before I do, because she was scary!

I think she told me that outfit was a freebie in the Boon group. It’s pretty much awesome for Halloween.

I really should get in bed now. Really.

I can’t sleep. 😦 It’s been one of those nights. It’s not a secret that I’ve been dating someone the past few months. He is my best guy friend, someone that manages to compliment me and make me believe what he says is true, one of the few people who makes me talk even when I’d retreat and be quiet. But tonight we decided to end things just because what we want in SL isn’t meshing together. I have a very specific idea as to what I want, and he never lied and said he’d be the one to fill it. It was…heartbreaking, to say the least. But I think, and he agrees, that it’s for the best in the long run. And we still keep our friendship, which is so much more important to me. ❤

I really need new headers for this blog and for Ch’Know Style. Add that to my To Do list.

Speaking of my review blog, I’m starting to get itchy about it. I can’t seem to keep up with some other bloggers because they IM designers IMMEDIATELY on release days [or before] to ask for review copies. That just…I don’t know, it seems so unclassy to me. I can’t imagine going to my favorite designers and asking for free stuff to blog. So by the time I see that there are new things, usually a dozen bloggers have thrown it out there because they smooze and ask for things. Is that really how it’s done? I have either bought what I blogged or it was given to me by designers who enjoy my writing or like me as a person. I don’t have it in me to pretend to be someone’s friend just to get free stuff and it’s really starting to make me sick to see other bloggers who do it. I mean, if they ARE your friend, genuinely your friend, that’s ok, and goodness knows in the subset of SL I am involved with, people are either bloggers or designers. But I see a lottttt of fake friendships based on what one person can get out of another lately. Is getting the very latest style that important? Maybe it is. And hey, if that’s how you do it, do your thing. Your $L balance and wardrobe are probably much better than mine.

But I know there’s the reverse side. I’ve seen a lot of designers say that they don’t want to bother bloggers and would prefer to be asked for review copies. And that’s nice, too.

I’ll just put it out there: If you’re a designer and you want me to blog your stuff, just throw it at me. If I like it, I’ll blog it. If I don’t, I won’t OR if you really want, I will and I’ll say what I think should be improved. Or you can let me tell in private and then yell at me for not liking your stuff. :-p I blog pretty much everything.

I guess I should try to get some sleep. I’ve been sitting here the past 2 hours watching the finale of Dawson’s Creek and crying when Jen dies.

Oh, you didn’t know she died?