…a pumpkin obsession in the fall.

I do. It’s nuts. I would have the entire sim FULL of pumpkins right now if I could. I’m guessing Lolita wouldn’t like me messing up her landscaping work with just massive pumpkins all over, though. And because I love my sister and don’t want her to bop me on the head, I’ve been keeping my pumpkins to our yard.

Last night, Birdy and I found ourselves alone, and well… I might be passing my pumpkin love onto her. 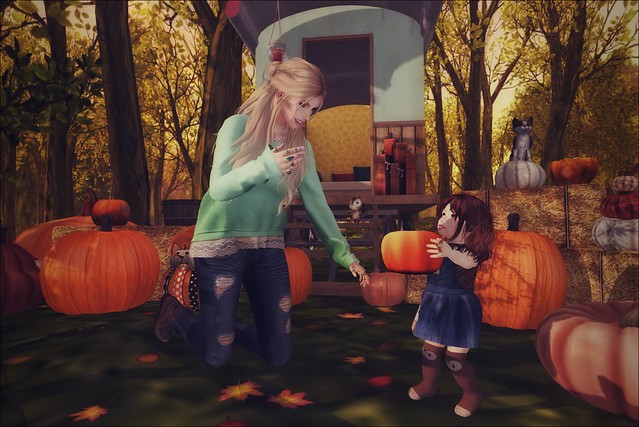 But I mean, I truly don’t see a problem. I can stop any time I want. You know, like in a couple of months when suddenly it’s Christmas time and everything is snowy and minty and my new obsession begins…

(If you like the pose we’re doing, I do have it up on Marketplace now. All the money I make from my poses fund my videos when I have to buy something!)

Everyone left me alone tonight!!! I was the saddest girl in the world again!

Aldwyn told me a while ago when I was whining that I should get a girlfriend to occupy my time when he wasn’t around. I don’t know if he meant it in the “Yeah baby! Girl on girl action!” way or the “Yeah….baby? Get some girl friends please because sometimes I need a break.” You just never know sometimes!!

But, I took his advice and being an overachiever, I got two.

Pumpkin and Ulaa came over to keep me company and then we spent the rest of the evening … doing stuff. WINK WINK NUDGE NUDGE.

[Well, if wink wink nudge nudge means being assholes on skype and laughing about nothing, because that’s exactly what we did.]

What a very fun night!

Not that we did anything super amazing. We didn’t even leave the living room, actually. But let me back up a bit.

Hi! Are you a single guy in SL? Do you have a decent looking avatar? Do you know how to hold a conversation in chat and/or voice? Are you looking for more than someone to just hop on a sexytimes poseball with? Are you nice but you enjoy a bit of snark sometimes? Do you NOT have a vagina in the real world? Are you not a whiny bitch submissive? Well, then have I got the girl for you!

I’m pimping my former wife out for a holidays boyfriend! She’s hot, right?

LMFAO! Okay okay, the morph is a joke. I promise she’s not running around thinking morphs are perfectly acceptable. If you think morphs are fine, then you are not the right guy!!

Anyway, I’m looking for a holidays man for her! She’s super funny, she’s a much better conversationalist than I am, she builds great houses, and she won’t be all greedy grabby expecting you to fund her entire SLife. PLUS you get to hang out with Al and me, too! It’s like getting instant friends!

I’d say she would hit me for this, but I already plurked it. So you know. No surprises! :-p

She’d come over tonight so I could grab a few face shots to do that morph with. We invited Pumpkin to come hang out with us, too, since she told me she was out in the snow with no shoes and that’s just NOT a place a Latina should be! This is the first time we’ve hung out in a couple of years since we only recently started chatting again. It was the first time we’d ever really had people in the house, and I have to say, I really enjoyed it! I spend so much time in SL by myself when Al is out working and Ulaa is up on her platform building, I forget how to be social. But we had a great time talking, laughing, and doing the crazy drunk dance.

I heard tonight that Miriel Enfield is packing up soon, shutting down her store, giving up her sim, the whole thing. I’m terribly sad over the news. I have been wearing Miriel eyes almost exclusively for at least the past year. Her “Open Ocean” color is one that I’ve probably worn the most in my blog posts and out on the grid, just because they are clear, bright, and get me noticed. I have almost every color of hers, and what I don’t have, I hope to get before she closes her doors for good. I like to match my eyes to my outfits. If you’ve never bought Miriel eyes, you owe it to yourself to go pick up at least – at LEAST – one pair. Inexpensive and gorgeous, you won’t be sorry. I wear her Standard size, but if you prefer a smaller eye, she does have the Realistic size. Oh, and the Anime eyes, which are huge and gorgeous and I wore those for quite a while in the early summer last year. And you absolutely MUST see her sim. It is unbelievably natural and beautiful. I’m hoping my new video card comes in before she shuts down for good so I can run out there and take photos.

So we’ve been getting chicken crazy over the past few days. You see, Nikki [yes, I’m blaming her] mentioned one night in the group that she had won some chicken eggs from a Midnight Mania board, and the chickens eat food and grow and lay eggs and whatnot. I can’t resist useless stuff, so of course I had to get them, as I mentioned in the blog before. And then it was chicken frenzy!!! I swear, everyone is getting them! But gosh, they are just so fun. And not fun in the sense that you have to do a lot for them. But just fun in general.

Nika and Keeme got their chickens, which produced a couple of awesome blogposts. Rylan & Aldwyn got their baby chicks, which sent Rylan into mommy mode and they even had a family portrait taken. Sophia is living with her kitten and 2 chickens in their skybox [I’m not sure Skyhawke knows this!]. And tonight Noel got his eggs and came over to hatch one in my pen with Pollo Sophia & Pollo Pumpkin. We’re hoping for a boy.

As we were sitting there staring at the egg, Pollo Sophia & Pollo Pumpkin started going all crazy. Pumpkin wouldn’t get her ass off the food dish, even sleeping in it, and Sophia started freaking out and pacing back and forth really really fast. We moved the food out from under Pumpkin, which sent her into a freak out. But I managed to click on both crazy chickens, tell them where their home was, and they were fine again. If for some reason this new egg is a girl, I’m naming her Pollo Lola, the shankingest chicken on the block!

I need to go to bed. All this chicken excitement is too much for me.

I had thrown a bunch of pics into my Flickr thinking I had an actual post for them, but then it turned out, I didn’t. But I like to share pictures, so here we go. 🙂

Last week we had a semi-group outing to a go-karts place. It was SO fun! I suck at driving, preferring more to just go fast. Here’s a pic of the Harlow-Sodwinds in their duo car. Lucky Sophia, I had to drive myself!! Look at Skyhawke’s face. It cracks me up!

And this is why I shouldn’t be allowed to drive myself.

Speaking of the Harlow-Sodwinds, we were out at their photography studio one evening and I snapped this picture of them. I tried to be all fancy like Sky and doctor it up, but I suck. 🙂

After Sehra’s rezday party, Pumpkin and I went to go pick up our decorations. Wanna know the truth to why Pumpkin’s humping the floor? I’ll never tell… 😉

We went to visit Aisuru one evening and I couldn’t resist climbing all over her rainbow thing. It’s fun!

Sometimes I pretend to be the receptionist at Sacred. And sometimes I just dance on the desk. They seem to put up with me either way.

Sophia and me on Industrial Night last Saturday at Sacred. We look hot!

Pumpkin, Sophia, and me jamming out on someone’s piano. Pumpkin says she knows the people, so that was good enough for me. LOL

And last but not least…. Sophia staring at her husband as he pwns us all and becomes a very pretty girl. I don’t think I’m supposed to show this picture. I bet I get fired for this. LMAO!!