It’s late and my pixel feet are tired from all of the dancing tonight, but I had to do a special Valentine post for my special Valentine. [Of course, I don’t think he actually reads my blog!] I was actually going to have this dedicated to him at the party tonight with the song but that didn’t happen, so I get to write it here. 🙂

It’s been almost 6 years since we first met and almost 5 since you decided that I was worth spending more time with. We’ve never had a fight, you’ve never used harsh words against me, and you’ve been more patient with me than anyone ever has been. I’ve never had to worry about anything with you and that is a gift that sometimes I feel like I don’t deserve. You know my secrets and my past and you have never judged me. You have been my rock for almost 5 years, the one constant that I know I can count on. You call me your angel every day, but truthfully you have been mine. Happy Valentine’s Day, I love you!

Remember those walls I built?
Well, baby they’re tumbling down
And they didn’t even put up a fight
They didn’t even make a sound
I found a way to let you in
But, I never really had a doubt
Standing in the light of your halo
I got my angel now

It’s like I’ve been awakened
Every rule I had you breakin’
It’s the risk that I’m taking
I ain’t never gonna shut you out!

Everywhere I’m looking now
I’m surrounded by your embrace
Baby, I can see your halo
You know you’re my saving grace
You’re everything I need and more
It’s written all over your face
Baby, I can feel your halo
Pray it won’t fade away 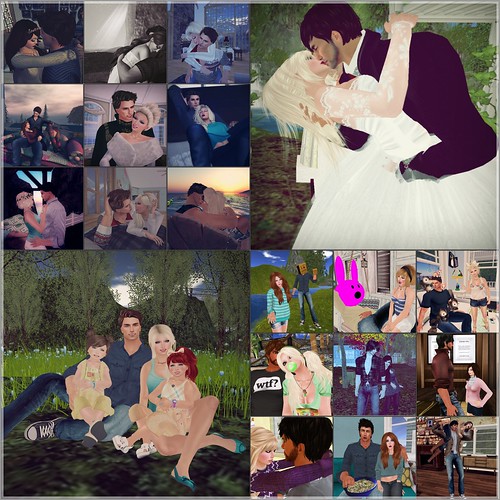 Happy Valentine’s Day, dear ones! It’s barely the 14th, but I know I won’t have time to update later. 🙂 Not that my updates are consistent or anything, but I do try to come around for holidays!

So Friday, we had a family Valentine’s party! Tonight there is a black and red formal Valentine’s dance, but that is an adult party and we couldn’t let our little ones be left out of valentine fun! 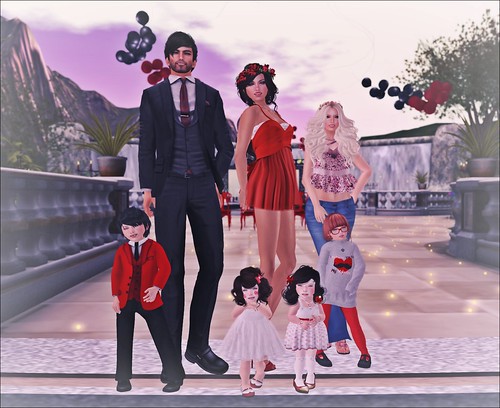 Birdy and Aldwyn aren’t in that picture because we took it pretty early in the evening before Aldwyn got online, and my poor Birdy is under the weather. And I’m not REALLY that much smaller than my sister! She was wearing heels and I was in flat sandals. If we’re not wearing shoes, we’re usually around the same height!

My sis cooked up a great meal for us of sushi, steak [and tuna steak for the non-cow eaters!], and for dessert we could have chocolate mousse or ice cream! Riley had both. She might have a chocolate problem. *laughs* 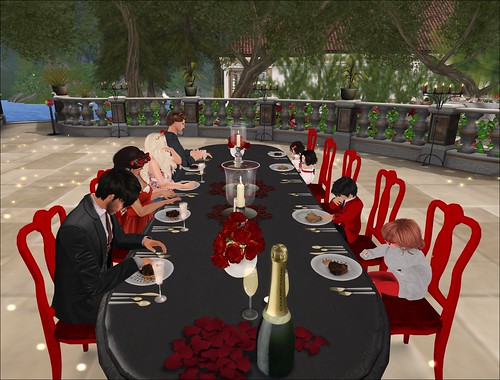 Of course, certain little girls can’t be contained and Payton might have decided when dessert was over. She’s lucky she’s cute. I wouldn’t have just anyone dancing around in my ice cream. [And I was also having a ridiculous time keeping things rezzed tonight, so that’s what’s up with that gray box on her wrist.] 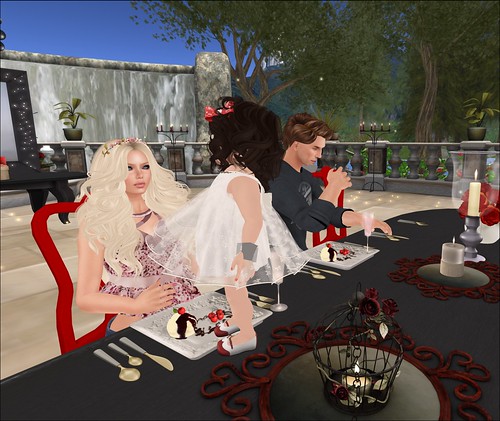 But then my sis gave us all presents! It was like Christmas! She even gave me a gift that I think was more of a gift for Aldwyn. *snickers*

After gifts were over, we went to their little beach and … well, there was the BIGGEST FONDUE POT EVER. 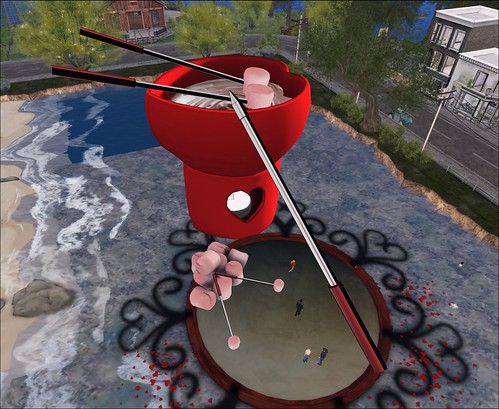 We became marshmallows! We had to run up the fork, dip ourselves in chocolate, and then jump down. I, of course, won with a time of 29 seconds! Go me! That kinda made up for when we did marshmallow sumo wrestling later and I was the first to fall over the side. Ahem.

When we got home, Aldwyn and I got our outfits for the formal. Usually it takes him foreverrrrr to find clothes, but he found something super quick this time. I was the one who went through 29030923 demos. This is the thing about me, and might be a problem for a lot of bloggers – Sometimes we honestly have no idea what to wear when we’re not doing a post! Really! It’s soooo much easier when I say “Okay, today I need to blog this event/store” and boom! It gets done. But tell me “You just have to look nice” and it’s like OMG WHAT IS HAPPENING HERE. *laughs* And also, when I blog, it really doesn’t matter if I blog the same item as someone else. Most creators and events have more than a dozen bloggers at any given time and it happens. But for a big dance like this, I don’t want to wear the same dress as anyone else. So I tried not to go directly to any of the bigger formals stores or pick a dress that I thought someone else would be in. I really like the dress I chose. I think it’s super classy and since it’s in black, I can wear it again if we ever choose to go out to a fancy dance club for a date night.