Goodness, it feels like May has been going on forever, and it’s not even mid-month yet! *laughs* May is a SUPER busy month for the OZ family. We’ve had FOUR parties so far, and we have another one tonight! And one on Friday! We are some party people! But they are all good things that we are celebrating, birthdays and adoptaversaries and other things.

Birdy’s adoptaversary party kicked off our month of parties on the 1st. She has been with us for two years! Can you believe it? We had a “Survivor” party for her. Lolita put together an absolutely amazing place for us. I never could have done it! We had to cross planks, search for words, brave a raging river, jump across a tiger pit, climb several flights of stairs to a zip line, and then make it all the way back down to the start. It was SO fun! And I don’t want to say who won, but… well, it was me. I totally won. 🙂

Last night, the kids did a Mother’s Day dance and had dinner for us. It was so sweet. There were many gifts and everything, too. All of the kids in our family are so good to us. ❤

But of course, the best part of my evenings are usually the few minutes I get alone with Aldwyn. 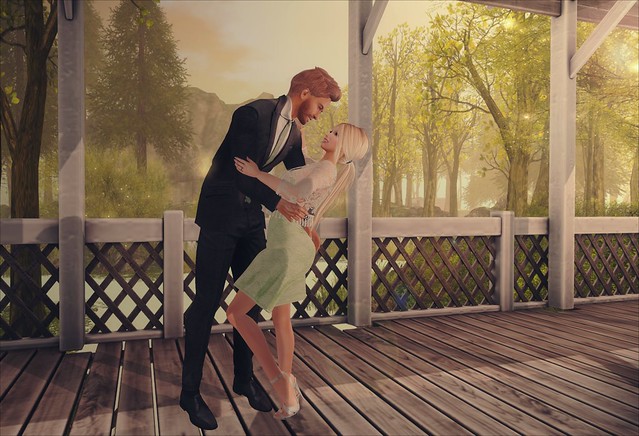 He always listens to me rant on about just the most ridiculous stuff! Well, some of it is ridiculous. Some of it are things I’m legit struggling with and I’m not sure how to make better. But he always listens, and he tries to make it better for me in some way, which I appreciate. Next month makes 6 years that we’ve been together. Isn’t that crazy? And I knew him about a year before that. Like I told him last night, “I’ve known you way too long. How am I not sick of you yet?” *laughs*

But seriously. How is HE not sick of ME? Guess I’m lucky that I’m cute!

[Btw, if you want to buy the pose I used for this picture of us, I put it up on Marketplace.]

Tonight my family went to celebrate with a new family! My friend Sai and her husband Jeffry have been on trial with a lovely little girl named Yuna for the past few weeks and tonight they asked her if she would like to be their daughter. She said yes! 🙂

I’m always excited when I see new families forming in SL, but we all had more interest in this one because we’ve been there to answer family questions and stuff since they became interested in adopting in SL. Seeing it all come together has been great! Of course, we had many great suggestions for the new family – like getting a choreboard [my suggestion] and giving Yuna the middle name of Enchilada [Payton’s suggestion].

After we came home and Birdy went to bed, I changed out of my party clothes and Aldwyn and I had some time to spend together. We don’t always have a lot of alone time together these days because of schedules and stuff, so we like to take advantage of it whenever we can. ❤ 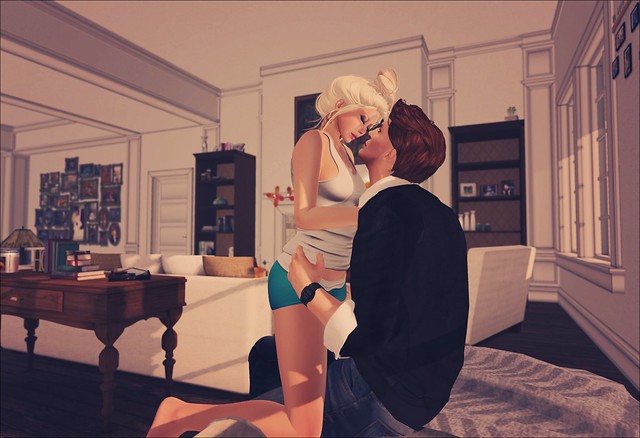 To start off with… Hey, we’re having a party! Woo!! 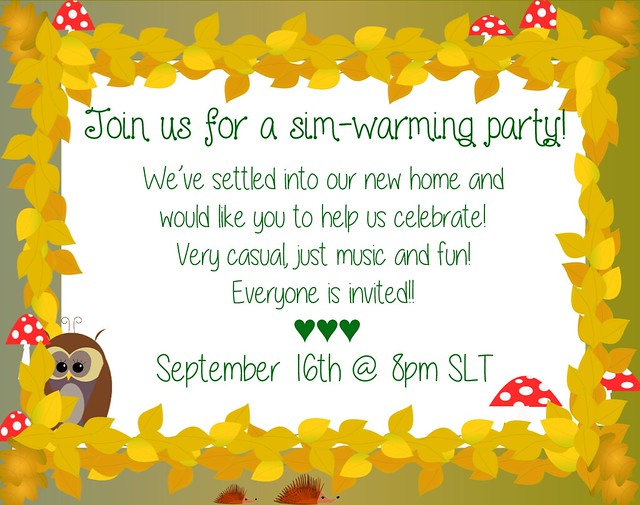 [Little known fact about me, but every time I say we’re having a party, the song “Party” from the awful late 70s movie Junior High School runs through my head. It was Paula Abdul’s first acting gig and boy. It’s not good. But you can see her old nose. So there’s that.]

The party should be fun! We’ll be dancing in the barn, but if you come by, you’re more than welcome to run around the sim and explore!

One of the best parts of the sim, to me, is the fact that we have a huge road that goes all the way around! I just love driving these days, and I do it QUITE a bit. But tonight I was a bit laggy so I decided to let Aldwyn drive me around. He decided not to use a car, but instead pulled out a motorcycle. Hey, I’m ride or die! [Preferably not die, though.] 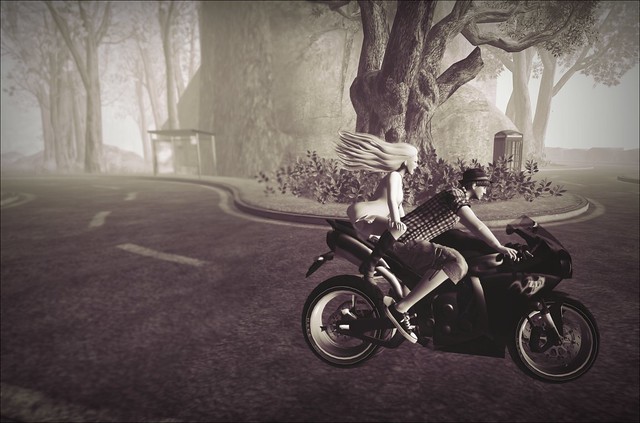 Being driven around is just as fun as driving myself. Maybe more fun because I can snap pics. Of course, we did kind of get a surprise bath…but luckily in SL, motorcycles can fly. At least now we’re clean for the party!

You know what I love? That moment when you KNOW it’s fall, despite what the calendar says. I was outside [because my internet has been down since this morning and there was nothing else to do] and suddenly our much anticipated cool front came in. And the humidity suddenly lifted and although it was still warm, there was just a certain feel about the whole day. It was really nice. 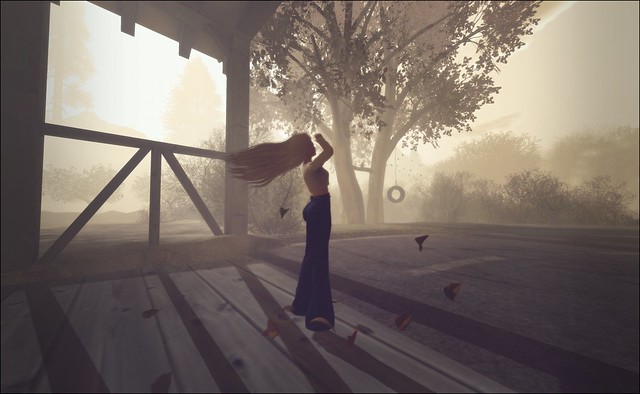 We’re planning on a sim-warming party next week. Nothing formal. Just a chance for people to get together, dance and laugh and talk, and check out the amazing sim Lolita has created. It’s truly beautiful!! I’m thinking maybe Wednesday in a nod to the old hump day parties, but who knows. Maybe we’ll do it next weekend. It kinda depends on what’s good for all of us.

Next week is also Aldwyn’s and my wedding anniversary! Can you believe it’s almost been 4 years? Crazy, huh? I thought about combining the sim-warming and our anniversary party together, but I don’t think I want to do that. The sim-warming is really about Bluebonnet and the family. An anniversary party would be more about us and we can do that later. 🙂 Well, if we remember. I’m pretty sure last year we forgot about it until a couple of days later. *laughs*

It’s starting to feel real that in less than a week, Bluebonnet is undergoing its biggest change in years. I’ve been picking up trees, joining the land together as people leave, and then last night I did something that has never been done. 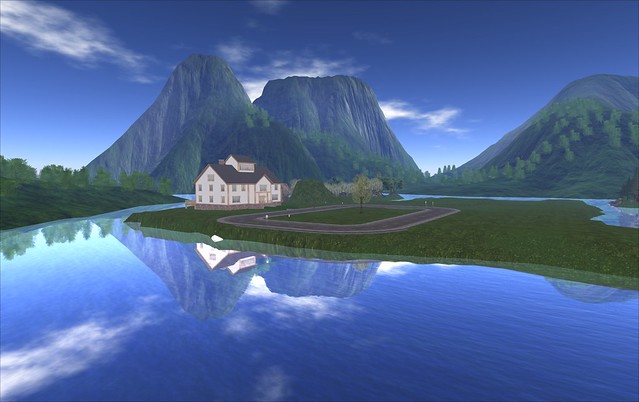 I flattened the center of the island.

Back when I first came to Bluebonnet, there was a mountain in the middle of the island. It basically ran almost the entire length of our parcel, separating us from the two other renters on the other side. Two or three. It’s been so long, I can’t remember. I just remember one of them had a Batman signal coming off their roof. Little by little over the years, I’ve demolished the mountain, but I never have actually gotten rid of it. The last remnants of the original mountain were the two hills we had that I put a bridge between. Flattening the middle felt good. It’s like yet another step in the right direction.

I’ve been a little down about the whole thing. I mean, it’s a big change and I don’t always deal with change well. But after Lolita and Takeo came over tonight, and we ran around laughing and my sis told me some of her plans, I started to get really excited! I just can’t wait to see what she comes up with and knowing that we can just run to each other on the sim rather than pulling up maps or waiting for teleports is going to be awesome! She pulled up the road that is in my picture [I took the pic a couple of hours before they came over] and the only things left on our parcel are our house, 2 chairs and a couch, a couple of platforms in the sky, and a few odds and ends that I need to either return to the family or drag them with me so they can pick them up. I’m picking up the house tomorrow even though the last remaining renters have until Tuesday evening to pick up their homes. Lolita says she can get started with what’s already empty, so woo! It’s happening!

But my SLife isn’t all island stuff. I had a chance to DJ for a bachelor party for one of Tymmerie‘s friends tonight. I haven’t DJed for anyone except family in so long, I almost forgot how to read a crowd! *laughs* That’s one of those little skills you pick up as a DJ in SL [and probably in RL] that you don’t think is very important, but it is. Like, with the family, they all love music a whole lot, have very eclectic tastes, and humor my love of mashups. So they’re easy! But with others, you have to kind of play it by ear. I wasn’t sure what this particular group wanted, but I eventually got it! They were a funny crowd! No, I mean, they are actually comedians! I believe most of them perform at, or go to, Lauren’s Place on Tuesdays at 5pm SLT.

It’s May! And not only is it May 1st, but this makes our Birdy’s one year adoptaversary!! 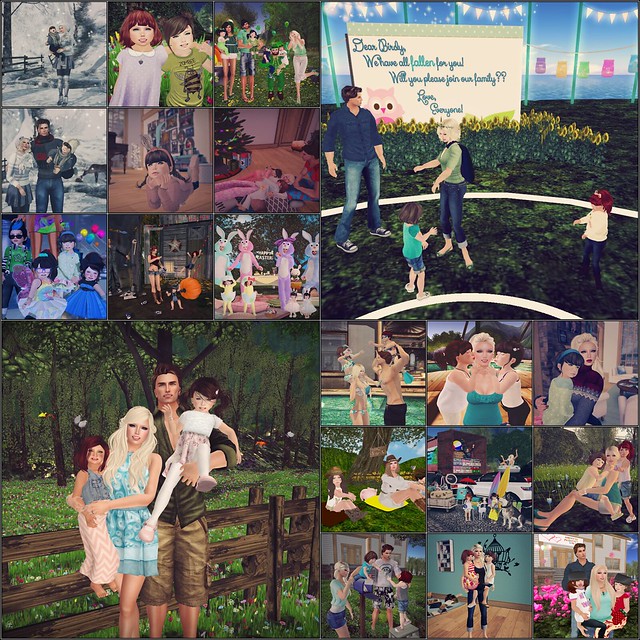 I can’t believe it’s been a year already! It’s been such an incredible year for us. I know Aldwyn and I are extremely happy in SL these days, and we both feel blessed that we were able to find another daughter who fit in with our family so well! And I know we’re both very proud of her and all of her RL accomplishments over the past year.

One awesome thing about this is that now everyone in the family has been together for one year and more! At least, for the next few days, this is the case. We have a new member heading into the family this coming week and I’m super excited! And who knows what the future holds? But that’s the way it should be. Families are never static, but they should always be wonderful. ❤ 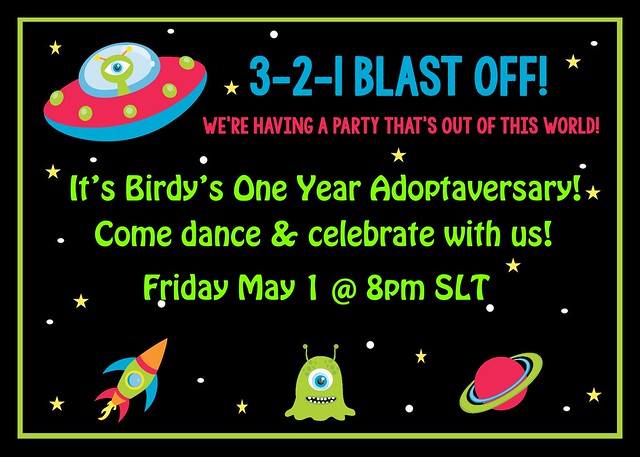 I can’t believe the month is almost over!! It seems like it went by so fast. But May looks like it’s going to be a fabulous month for me and my family, so that’s good. We have FIVE parties coming up. Crazypants!

My Birdy’s adoptaversary party is on Friday and she likes space, so we’re gonna be in space! 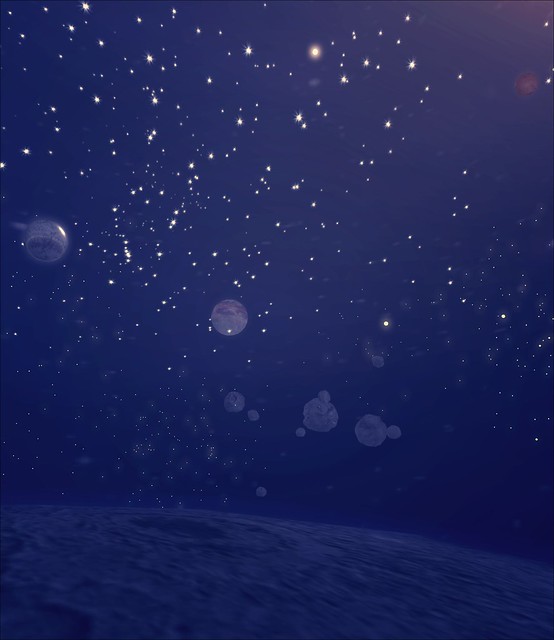 [I messed up my photo settings and didn’t notice so this pic was actually way more cool being wider.]

I’m excited for the party. I think I might have gone overboard on the particles but that seems to be my M.O. when it comes to decorating for parties. What can I say? I like sparkles.

We hung out with the Oleanders tonight because we really haven’t seen them since our vacation ended. We had a lot to talk about – parties, family stuff, randomness. Then we stopped in at the noodle shop for pre-bedtime bubble tea. 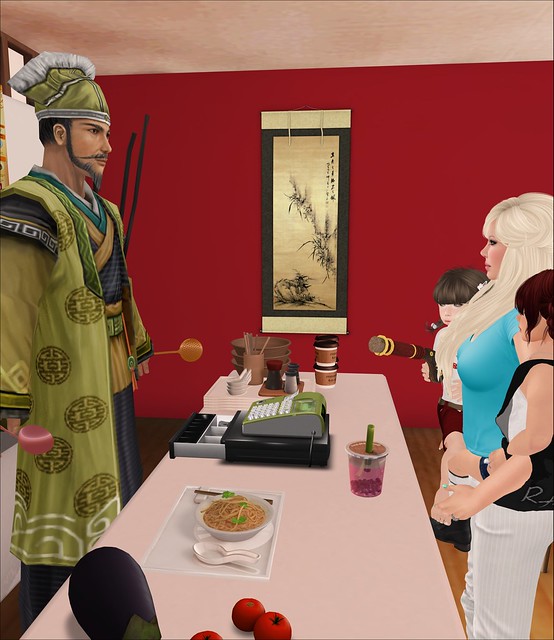 We’ve been having soooo much fun on our rainforest vacation! Usually our vacations are only a week, but we’re going longer this time around because there’s still so much to do!

Tonight we had a pool party! 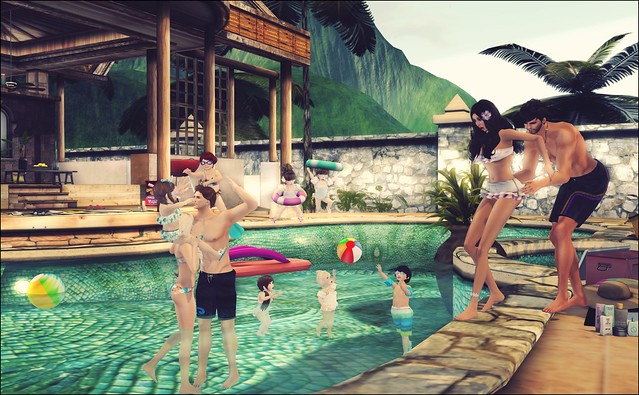 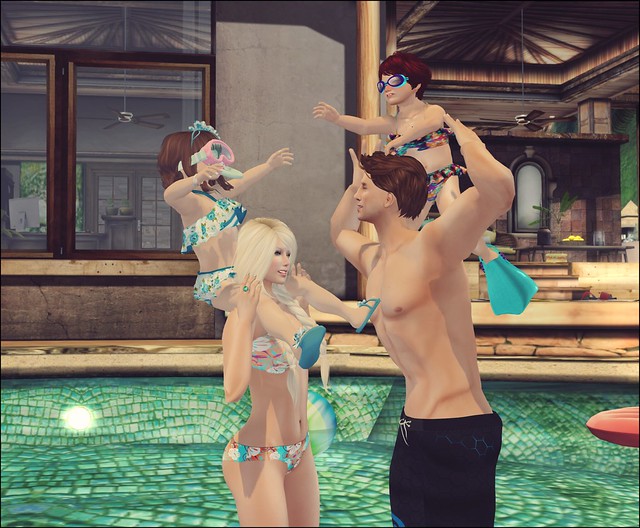 Lolita DJed the party for us and a few days ago, she asked us all 3 questions and we had to give her 3 songs that she would play tonight. It’s fun when we do that because our whole family has pretty awesome musical tastes. We’re getting to where we can start to pick out who chose what song, too.

Tomorrow night we’re dressing as pirates and watching a movie! Arrr! But I’m hoping to spend some time in the rainforest during the day. I really haven’t gotten to be in there as much as I’ve wanted to be, and I’d like to get in some more adventuring.

But until then… goodnight! 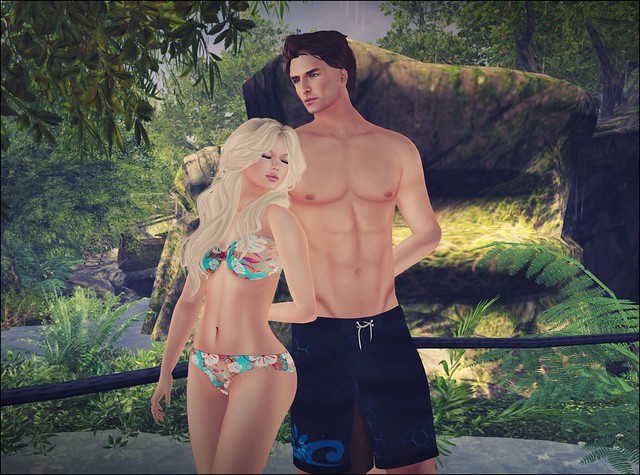